Iridology (pronounced eye-ri-dol’-ogy) is the science of studying the iris or the coloured portion of the eye. Based on empirical observations, made by medical doctors and other researchers over the last 300 years, which suggest that certain dysfunctional states in the body are indicated by different textures and colour properties within the iris. It is useful for preventative health because these imbalances in the body can be detected early on, giving time for adjustments to be made using natural therapies.

Jennifer Thompson is one such practitioner, and the visions she sees dancing through the windows to your health can be quite awakening….. [Read More]

Spas and Wellness in Koh Samui – on concierge.com

Posted in September, 2009 on concierge.com under Editor’s Picks:

Like yin to the island’s raging nightlife yang, Koh Samui’s spa and wellness offerings are impressive and diverse. Absolute Sanctuary, a retreat in the hills above Choeng Mon Beach, boasts some of the island’s best yoga, Pilates, and meditation classes along with the Love Kitchen, a vegetarian café. Offering house calls by appointment, healer Jennifer Thompson educates clients on raw food and performs iridology, an ancient science of reading the iris of the eyes to identify physical and emotional concerns. The American transplant is developing a loyal following that extends far beyond these restorative shores….. [Read More] 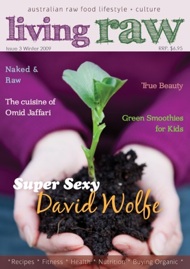 Jennifer is now a regular contributor to Living Raw Magazine.

Watch for future articles by Jennifer on Raw Foods from around the world.