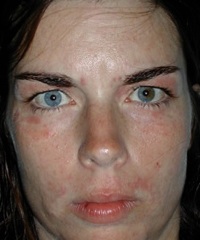 At the best of times, the rash was mainly around my eyes

In 2004, seemingly out of nowhere, I started to develop a very itchy red rash on my body. It quickly got worse and seemed to spread like fire, often itching like crazy and making me insane. I had never experienced anything like it before, and there seemed to be no pattern to what would trigger it. Creams seemed to make it worse – somehow they felt like they were ‘trapping’ the rash inside of me. At the same time, I also started getting heart palpitations, and at any time, my heart-rate would increase from 60 beats per minute to 140. I had no history of anxiety whatsoever. I was generally eating quite healthy (at least so I thought); I didn’t smoke, barely drank, exercised, so how could I be so sick?

Friends told me to meditate. Doctors told me it was a simple case of eczema. I had a complete round of testing done and everything came up fine. I was tested for heavy metal poisoning, various viral infections, standard food allergies (milk, wheat, eggs, gluten, etc); I had chest x-rays and EKG’s done – and they found nothing. The only thing that came up suspect during that time was high uric acid levels. The doctor suggested that I go on medication to bring down the uric acid; he said I was in danger of having gout. (I now know that food additive #635 Ribonucleotide can cause uric acid levels to rise.)

Eventually, out of desperation, I started my own ‘elimination diet’ in an effort to narrow down the possibility of it being a food allergy. I just had this feeling that the rash was being caused by something I was eating. I had tried all the changes of soaps, washing powders, etc etc, and I felt like I had exhausted all possibilities. It was more than 1 year of suffering with the rash at this stage. The elimination diet was worth a try.

I decided to tell people that I was a celiac (i.e. no wheat or gluten) because it seemed easier than having to explain what I was doing (since I really didn’t know myself!) . I began a food diary, writing down what I ate daily and when I had an outbreak. The wheat and gluten-free diet helped tremendously, and now I know it is because ribonucleotides are often found in products containing wheat. About once a month or so I would still have an outbreak, but it seemed manageable. 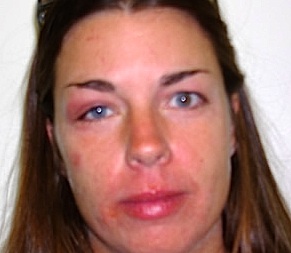 Puffed out after a nice anaphylactic reaction to #635

By that time, however, the outbreaks had become more severe, and I started to get more of an anaphylaxis reaction in addition to the rash. When I did have an outbreak, my lips and throat would swell. I had no choice but to start taking anti-histamines.

Finally the day of reckoning came to me. I hadn’t eaten anything the previous day and I made a salad using the cheap salad packets at work. About an hour later, I started to feel the itchiness start in my face, eyes and lips. Somehow I just knew it was the salad dressing. I quickly did an internet search on ‘food additives itchy rash’ and instantly found Sue Dengate’s site. What I found was amazing – countless stories of others who had suffered with the same exact symptoms as me, and I knew that I was not crazy. There was no doubt in my mind that I was also suffering from the Ribo Rash. When I checked my food diary, it was clear that every single time I had a reaction, I had eaten a food with #635. Even on the wheat-free gluten-free diet, I realized that I had eaten seaweed-flavored rice crackers, the veggie burger at Hungry Jack’s (with no bread), cheap salad dressings, and other flavored tofu products which were causing my outbreaks. Sometimes when I try to tell people what happened to me, they cut me off and say, well I don’t eat any of that crap…and I say, ‘You have no idea what you are eating!!’

It took about 3 months from the time I eliminated #635 from my diet for the rash to go away entirely. It did not itch whatsoever during that time, it just slowly but surely started to clear up.

I contacted Sue Dengate personally to thank her and tell her my battle with the Ribo Rash so she could include my story on her site. She told me I had one of the worst cases she had ever seen. Since then I have worked with her to help educate people to the dangers of this chemical. My photo is on her site and is also in her DVD entitled ‘Fed Up with Children’s Behavior – How Food Additives Affect Behavior.’

When the DVD was released in Australia in 2006, I was featured on Today Tonight, a 30-minute news program, to discuss my story.

No one should go through what I went through. It it so obvious to me now that I was suffering from an extreme allergic reaction, and it angers me that doctors are so completely ignorant! How could any medical professional shrug off such an extreme reaction and say it was stress?? I went to many different doctors during that time. It is unfortunate that they are not being educated about the dangers of food additives. 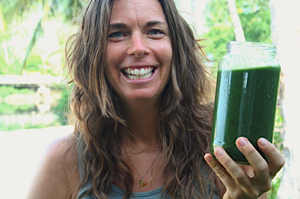 It’s been more than 5 years now since I eliminated #635 from my diet. I have no rash whatsoever, not even the tiniest spot anywhere on my body. People often compliment me now telling me I have ‘amazing skin.’ Sometimes I tell them, ‘You cannot imagine how much that compliment means to me.’ For 2+ years I was embarrassed to go out in public; I felt unattractive and uncomfortable all the time. Now I have beautiful skin which radiates from the inside out.

You can now imagine why the thought of an all-raw food diet started to appeal to me. Perhaps this allergy was a blessing in disguise for me because it was really after this whole experience that I decided to try eating all raw. In fact, I started to see the raw food diet in a completely different way – Raw Food now represents safe and healthy eating in a way that I could have never comprehended before. I now understand first-hand the poison that is in our processed foods and I am so happy to be able to make the choice to not continue to poison myself anymore.

I spend a lot of time educating people about detox and raw food, but also about food additives, food label trickery and quality of food. I always say – you can do every diet right and every diet wrong. Quality of food is essential for quality of health. I learned that lesson the hard way!