In a recent blogpost, I praised the healing powers of castor oil. But what I wanted to share with you today was how we even use castor oil on our dog. In my opinion, it’s simply the best natural remedy to have at home for pets. You can use it on your pets too! 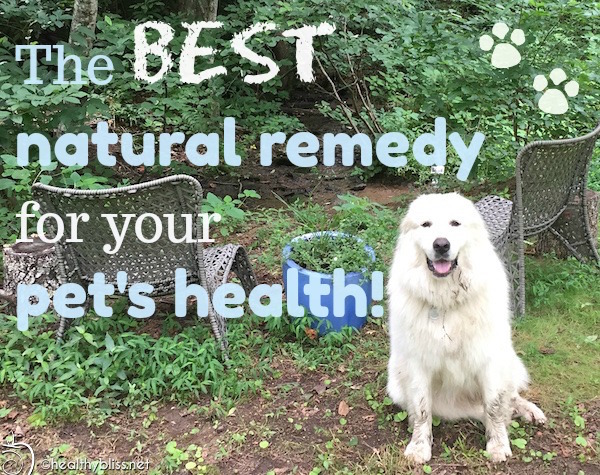 Finally, a chance to feature Ella on my blog <3

Ella has benefited from the healing effects of castor oil. After she got spayed, she was understandably in a lot of pain. I was worried because she’s a big dog (more than 85 pounds of pure Great Pyrenees love) and she was having a difficult time walking after the procedure. When she arrived home, I immediately applied castor oil on her belly around the incision, but not directly on the stitches. I noticed an almost immediate improvement in her pain levels and ability to get up/walk/move in just a few hours. I continued to apply it twice daily for 2 weeks after her surgery. She healed perfectly with no infections or problems. I do believe the castor oil sped up the process of healing for her. Funny enough, during that time I noticed she would lick my hands after I applied the oil and I realized that she really liked the taste! So, I started adding 1 Tbsp. of castor oil to her food daily. After a few months of her eating this small amount of castor oil daily, I really noticed a major improvement in her coat. Her hair was thicker, softer and fuller…to the point where now, people comment on her fur every time we take her out. “That’s the fluffiest dog I’ve ever seen!” is something we hear all the time now. Before the castor oil, I cannot recall anyone commenting on her fur. One small word of advice on this – if you do decide to give castor oil to your dog, only add it once a day and to the morning food only. Because castor oil does have a natural laxative effect, adding it to an evening meal can make a dog have to go in the middle of the night. And I’m sure neither you nor your dog wants that!

After so much success with castor oil, I did some further research and found that it’s also helpful for ear infections, ringworm, itchy rashes, ear mites and even fleas. I immediately thought again of our lovely dog Ella and how she was often irritated with her ears, trying to scratch or shake her head all too often. Many times, I would check her ears and could see signs of red inflammation.

So, I bought a glass dropper and poured castor oil pus several drops of organic tea tree oil inside. Now, when I see her having any ear problems, I will place 1-2 drops of organic castor oil in each ear and rub the ear after. I try to do this at night before she goes to bed. Amazingly, the next day I can see that she’s no longer irritated, no longer scratching and when I check the ears, they are a good healthy color again.

I love having natural remedies that work for everyone at home, including our animals!